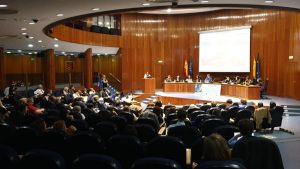 The 3rd General Assembly meeting of the European Paediatric Translational Research Infrastructure (EPTRI) was held in Madrid at the Ministry of Health, Consumption and Social Welfare on the 27th and 28th of March 2019.

The event was the occasion to sum up the activities and the goals achieved in the first year of the project as well as discuss the challenges of the future EPTRI’s work.

In this occasion, an overview of the activities carried out so far in the project was provided, together with a description of the future EPTRI architecture in terms of governance model, tools and services to be offered in the future platforms as well as the launch of the survey aimed to map the needs of the future users.

A dedicated focus on patients involvement was organised with a workshop where the youth leaders of the Spanish, Italian and Albanian Young Persons Advisory Groups (YPAGs) were the actors, underlining the necessity of paediatric patients’ involvement in the whole drug development process as well as the importance of the support of the Young Persons Advisory Groups (YPAGs) in the EPTRI project and overall in the health research.

The second day of the meeting was focused on the results of the context analysis of the project and provided the occasion to present the business and sustainability models of EPTRI in the European scenario as well as to discuss the role of each country in the building of this new RI.

Moreover the leaders of the thematic platforms provided a summary of the status of the activities as well as of the potential tools developed and examples of feasibility studies that will allow to simulate the services to be provided during the EPTRI establishing phase.