EPTRI AT THE 3RD EUROPEAN CONFERENCE OF PHARMACEUTICS IN BOLOGNA 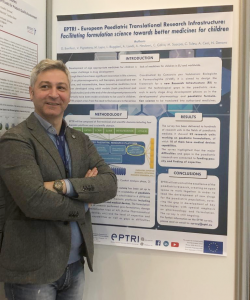 This year EPTRI was invited to participate in the 3rd European Conference on Pharmaceutics, which was held in the city of Bologna (Italy) last March 26th. Nunzio Denora, from University of Bari and co-leader of the WP8 on paediatric medicines formulations and medical devices, presented a poster entitled “EPTRI: facilitating formulation science towards better medicines for children” during the poster session of the conference.

The topic of this year’s ECP was “Bridging science into pharmaceutical practice”, which is precisely EPTRI’s goal, to eliminate the gap between basic paediatric research and formulation science for children, among other objectives. The conference received attendees from all over the world, including researchers working on drug products and medical devices, scale-up and/or medicines production.