EPTRI AT THE 67th MEETING OF THE SPANISH PEDIATRIC ASSOCIATION 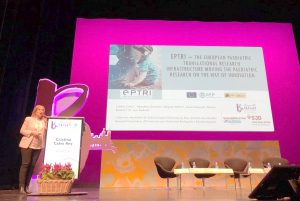 Dr. María José Mellado, president of AEP, was the chair of the roundtable.

Dr. Cristina Calvo was the person responsible for presenting the EPTRI project. She highlighted the participation of Spanish researchers and the opportunities that a network like EPTRI can provide to the early phases of research in paediatrics in order to develop new molecules, biomarkers, devices or paediatric formulations.

During the meeting, several researchers showed their interest in the opportunities that EPTRI could offer in a short term.