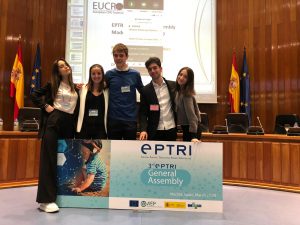 During the first day of the 3rd General Assembly meeting of EPTRI, held in Madrid at the Ministry of Health, Consumption and Social Welfare on the 27th of March, took place a Roundtable with seven young people members of Kids Albania, Kids Barcelona and Kids Bari. The activity was moderated by Begonya Nafria, coordinator of the Kids Barcelona group.

The main aim of this activity was bring the voice of the young people to the General Assembly of EPTRI with real examples of their involvement in activities in the field of basic research. Several examples were introduced demonstrating that the participation of patients in research as earlier the better with the aim to include the preferences and needs of the patients.

The involvement of patients and families getting funds to promote basic and academic research was one of the examples of the Kids Barcelona team. Pulseras Candela (Candela’s Bracelets) is an initiative that has allowed during the last five years several basic research projects in paediatric oncology, thanks the donation of two million of euros to Sant Joan de Déu Research Foundation.

Other example that Berta de la Rosa from Kids Barcelona brought to the discussion was the need to create friendly assent documents for paediatric patients. In this sense, she introduced the guidance that the members of this YPAG created with the aim to offer general tips regarding the content and the format of this important document

G. Carone and C. Giannoccaro from KIDS Bari explained their contribution in the EPTRI project supporting the WP8 survey on formulations, aimed to investigate how much young patients like the medicines they take and how would they like their medicines to be. Together with the members of KIDS Albania and KIDS they revised the survey to make it children-friendly. They provided inputs by identifying the difficulties to make the questions originally designed by adults and for adults clearly understandable to the young people. They proposed to simplify the language, adding clearer explanation of some questions and making the terms less specific for very young people. They also contributed to disseminate it through their friends using social media channels.

Semanaj on behalf of KIDS Albania presented the activities done in the revision of informative and educational materials to provide the fresh perspective of children for children.

After the presentation of all the young people a very active and interesting debate was held with the audience. The questions put in value the benefits about the involvement of young people in basic research and emphasized the need to have more teams around Europe.