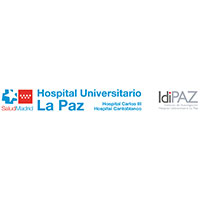 SERMAS is the Public Health System for the region of Madrid, Spain. Along with the clinical facilities, such as the University Hospital La Paz – HULP, it also holds several research institutes including the Hospital La Paz Institute for Health Research – IdiPAZ.

The HULP integrates also two more hospitals, which performs a referral health infrastructure for an area with a population of 750,000. It has around 1,400 beds and 47 operating theatres distributed in various buildings and more than 7,000 qualified employees. There are about 50,000 admissions annually, more than 200,000 patients are treated by the emergency services, and more than 1,300,000 outpatients are seen.

This prestigious hospital is recognised for being an important pediatric hospital of great international recognition, which is involved in all the significant areas of pediatric health.

SERMAS-HULP, in ID-EPTRI project, is involved in the WP 2, 3, 4, 5, 6 and 9; in addition to lead the task 3.4, which is the development of an on-line questionnaire to survey the units identified in task 3.3. This survey will be used to collect different information to clarify the scientific and technological context for paediatric research in the EU.

Main tasks in the project: