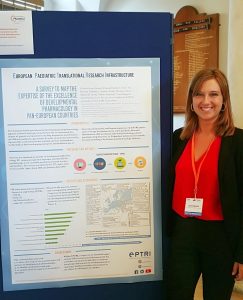 On behalf of the EPTRI consortium, Valeria Pignataro, — WP8 reference person for Consorzio per Valutazioni Biologiche e Farmacologiche (CVBF) —  recently attended the 10th APS International PharmSci Conference, which was held on September 11-13th at the University of Greenwich, in London. Valeria presented two posters portraying several outcomes of the project.

The theme of this year’s conference was “Pharmaceutical Science in a Changing World. Reflecting the needs for sustainability and diversity in addressing the health of globally connected populations”. The meeting offered an opportunity to update on the best emerging pharmaceutical science in several fields such as medical devices, biopharmaceutics, nanomedicine, 3D printing techniques, etc.

The two posters presented by EPTRI were the following:

The first poster was focused on the results collected through the surveys disseminated in two periods April – June 2018 and January-April 2019 to map the research units in Pan-European countries and their expertise and identify the potential gaps in the available paediatric research services and facilities. In this specific case, the poster provided an overview of the answers in the field of developmental pharmacology according to the geographical origin of the research units, their competences/expertise and services to be provided in the developmental pharmacology platform.

The second poster referred to the EPTRI survey aimed at testing children’s experience with taking various pharmaceutical formulations. This poster was only focused on the Romanian answers and analysed the preference of different medicines, the different preferences for type of formulation on the basis of the health status and the factors influencing medicine preferences (taste and swallowability). It also highlighted the importance of children involvement as active stakeholders to help other children to receive the adequate and suitable formulation of medicines.